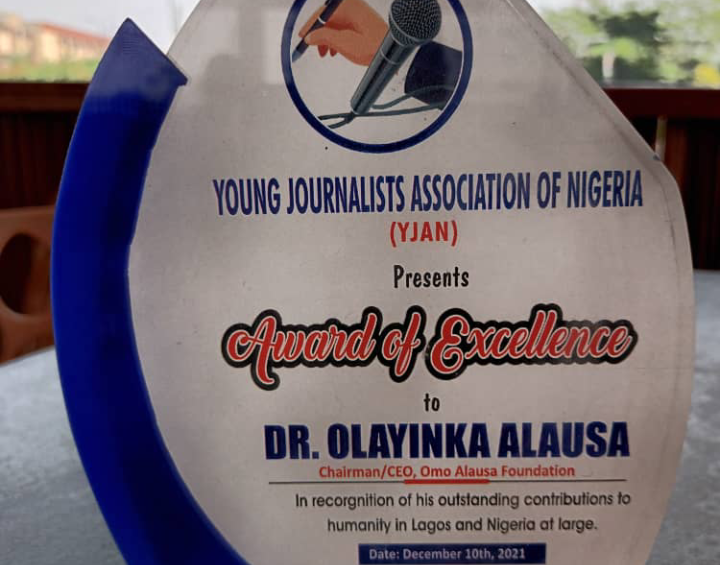 A journalists association, Young Journalists Association Of Nigeria (YJAN), has honoured the Chairman of Omo Alausa Foundation, Dr Olayinka Alausa with Award of Excellence for his interventions in reducing poverty in Lagos state.

While presenting the award, the National President of the association, Mr Okunade Adekunle, said the nomination of the awardee was approved by the majority of the members of the association across Nigeria after evaluating the impact of the foundation on humanity.

Adekunle explained that overtime, the activities of the foundation had been monitored and that it was time to further encourage the foundation in doing more for humanity.

” We are giving this Award of Excellence to Dr Olayinka Alausa in recorgnition of his contributions to humanity through the various empowerment and intervention programmes in Lagos- Nigeria. We cannot forget his soft loan with zero interest initiative for the people of Ikeja Division. We cannot also forget his activities at Ikorodu Oga day and also his empowerment programmes/ water infrastructure at Badagry division. All thaws form the association’s decision to honour him with this noble award”, said Adekunle.

” With this award, we are calling on Dr Olayinka Alausa to join the leadership drive of Lagos by venturing into politics for the sake of the poor masses. For him to have been using his personal fund to enhance people’s life, it shows that if he is giving the opportunity into public office, he would serve the poor masses better. This is the kind of people we are yearning for in public sector”, said Adekunle.

Receiving the award on his behalf, the Coordinator of Omo Alausa Foundation ( Ikeja Division), Com. Olufemi Olanrewaju Enigbokan, expressed appreciation for the honour bestowed on the Chairman of the Foundation, saying that it shows that people are watching closely the activities of the Foundation and its Chairman.

Enigbokan said that the award would further make the foundation stronger and remain focused in its drive to alleviate poverty.

He said that all the intervention programmes executed by the Chairman of the foundation were borne out of his love to reduce poverty in the society.